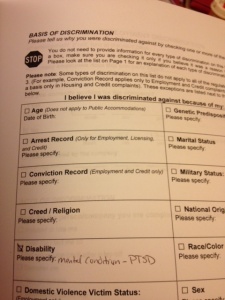 I’ve decided that I’m finally going to do it. By making this promise on here to you, dear readers, that means that I must follow through.

I am going to file my complaint.

Months ago I attempted to go back my previous field. I was at the job for less than three weeks. I feel compelled to point out that I left of my own accord. I don’t want to get into specifics, but my supervisor was discriminatory about my PTSD.

I was able to go back to my previous position, but I think the whole experience set me back in a number of ways.

Friends were divided as to whether or not I should file a discriminatory complaint. I’ve been torn as well. I let it sit for three months, and I’ve found that I still want to file the complaint. So I shall do so.

Honestly, it’s probably likely I won’t prevail. Not because the allegations aren’t true, there’s just not a whole lot of proof. That’s one reason I was hesitant.

But I decided that even if I don’t prevail people who discriminate need to be called out on it. She will, at the very least, have to respond to my complaint. Even that very act could go towards planting a seed in her brain that her behavior towards me was unacceptable, unlawful and discriminatory. Even if I don’t “win” in the traditional sense I might “win” by getting some people to give better thought to their actions.

6 thoughts on “Speak the truth”