I’ve been incredibly negligent in keeping up with comments and reading other blogs, and I apologize. I’ve been caught up in a number of things, one of which is preparing for the new job. Many thanks for the support y’all have given me on that very exciting development.

Last week I had a training session in my current job that I had to attend with my colleagues. It was one of those fluffy-team-building things that makes the introvert in me want to run away. I know it makes no sense. I have no issue with interviewing witnesses in employee misconduct cases or going to a hearing to represent our employer. I do well with facts, contracts, and laws. I can argue and question someone on all of those things. But team-building events where all the extroverts will be talking over each other and order will cease to exist just makes my mind shut down.

And that is exactly what happened. The extroverts were all over themselves talking and talking and outdoing each other. I could feel my peeps inside of me going haywire. I was trying to keep it together, but I was sitting at the table upfront (how did that happen?), and it was growing difficult to keep myself from shaking. A few shakes escaped from me.

The peeps liked the large training tables. They wanted to get under the table. I started reminding them that we can’t do that at work. It was exhausting doing all of this internally while trying to look engaged and unaffected.

Finally the trainer called a break, and asked us to come back as soon as possible because we were behind on time. I thought I was going to lose my mind because I had hoped to get outside just for a few minutes. I didn’t know what I was going to do. I must have had a look of utter panic on my face because my boss, who was sitting right next to me, asked me if I would like to go across the street to get her a cup of coffee. God love her, in that moment I wanted to throw my arms around her. I was so stunned that she mistook my silence for a wait for money from her. Finally I snapped out of it and said that I was happy to get it for her, my treat.

I flew out of there like my life depended on it. I felt so relieved to be outside. I could feel my peeps start to finally settle down. My legs then took me to the drugstore next to the coffee shop, and this is what I found … 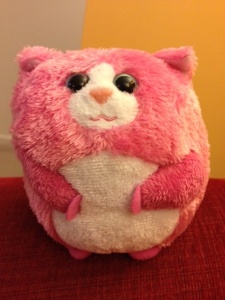 Someone, I don’t know who, needed something. I didn’t know what they needed, but I had the sense that I wasn’t going to find it in the coffee shop. I walked into the drugstore, and right in the center there was this kiosk of stuffed animals. When I saw it I knew that was what at least one of the peeps needed, though I sense it was more than one. I approached the kiosk, and I immediately started negotiating, “Ok, I get it. Today is hard, very hard. But we cannot get the huge stuffed hamster. We have to be discreet. How about this guy?” That was when I picked up the small pink hamster-looking thing that you see right here. It appeared to be a workable compromise.

I paid for Mr. Pink Hamster, and made sure I got a shopping bag. Usually I forgo shopping bags to cut down on waste, but today I needed one, as I was not going to walk back in with a stuffed pink hamster for all to see, especially since I anticipated returning  late to the training.

Finally, I got the coffee, and when I got back to the training session they were still on a break. My boss then said to me discreetly that she remembered that I had told her that I liked running errands, and that she saw that I was uncomfortable so she thought I might like an errand.

My boss is one reason that it will be hard to leave when I do so in a couple of weeks. She’s smart, fair, and very reasonable. It’s too bad my heart is not in this work because she’s a very good boss. I even showed her the hamster in the shopping bag, and she thought it was a great idea to get it. She’s familiar with my PTSD and my DID. We were friends first, and then she became my boss. That was how she already knew about my situation. But she would be, and is, supportive with any of her staff, not just me.

Supportive people can be found in unexpected places. For me, it was in a job that was not a good fit for me. This detour in my life led me to some very great people. Perhaps that’s why I had to come here.

3 thoughts on “A pink hamster”

Public Storytelling in the Collar City and Beyond

Academic librarian with 15+ years of experience. Passionate about lifelong learning and student success. Interested in user experience and organizational leadership. For me, being a librarian has never been about the books--it's about the people!