Today I found myself waiting for a cleaner I hired that never showed up, and that was just as well. I surprisingly felt okay, and I was able to do some cleaning myself without getting too freaked out in my apartment. That was one reason I hired a cleaner, so that things could get done in my apartment that were being neglected because of my inability to spend long periods of time in my place.

But today was different, and I can’t figure out why, though I am not complaining. I started cleaning off my coffee table while I was waiting for the cleaner. Before I knew it I realized he wasn’t coming, but I was on a roll. So, I cleaned it off. It took a while, but I did it. And here it is … 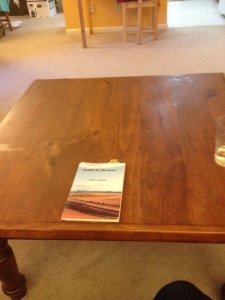 I even used the vacuum! Although it took a while to achieve such a small task of cleaning off a coffee table and vacuuming I still felt accomplished. And I felt that way because I did not freak out. I did not start getting anxious and scared and depressed in my place. I did not feel like dying, and the thoughts I used to get from Belle about death were not there. And thanks be to God for that.

It was still a hard day, and I certainly felt sadness. The difference was that it did not feel like the end of the world. The book you see on the coffee table is a poetry chapbook that my long-lost father sent me back in 2008 when we briefly reconnected. We could not maintain the connection because his active alcoholism was too much. I called him on Father’s Day that year, and became upset at hearing my father drunk on the phone. I just could not maintain a connection under such unpredictable circumstances, never knowing when he would be sober. I found that book of poetry while I was cleaning. It took my breath away. I realized that when I received it back in 2008 I had not paid much attention to it because I was still mad at him for being drunk on Father’s Day that same year in 2008. The book, braille for the heart, is a chapbook of poetry by Robert Vasquez. 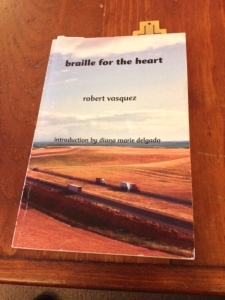 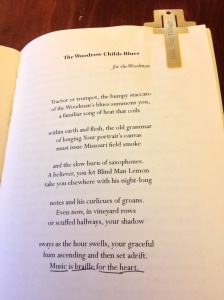 He underlined the last line, “Music is braille for the heart.” It just takes my breath away to see this because the underlining was meant for me, at least I presume it was. I miss him, but I don’t like thinking about how much I miss him because the pain is a huge hole in my heart. The pain of knowing that he’s been walking dead to me for decades. The alcoholism took him from me, and will likely keep him from me for the rest of our days. He is the only person on this earth who truly gets me. Case in point, he sent me a chapbook of Latino poetry without knowing how much I love poetry. I know he sent it because he connected with the chapbook. But the truth is that I’ve loved poetry since I was a child. And though he was not around when I fell in love with poetry I know that he knows because he’s the only one that knows me. And the only one that knows me is without reach. I cannot talk to him about life, or any of the challenges or accomplishments I’ve had. If I could talk to him I know he would relate to so much of it. Hell, we’re both even alcoholics. I was more like him than I wanted to be.

Oh, I miss him so. There is so much loss here that it is just hardly palpable, especially since the loss of him left me with my mother. The irony is in the fact that he’s the parent that really loved me, but his alcoholism kept us apart. This one gift from my actively alcoholic father is light years beyond anything my mother has ever given me. She may have been present, but she never had the capacity for love. It is simply not within her. Yet, she is the parent I got to be with, the one who could not love. The one who could love was and is too sick. He is sick, but I still love him, and always will.

3 thoughts on “A Memorial Day for memories, but not the usual sort …”